The Curse was a Blessing 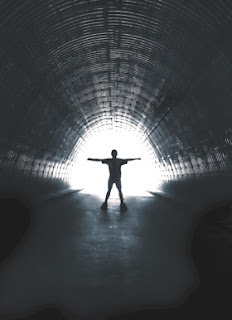 Throughout the last 5 years or so, I've been able to see that certain situations in my life that seemed like terrible, terrible tragedies were actually beautiful, beautiful blessings.

A few years ago, I was working for a start-up Christian newspaper. I was really enjoying the job and the work that I got to do. There was some tension for me in it, since there are aspects of current Christian culture that are weird and uncomfortable for me. I was torn between needing to represent the culture accurately and wanting to change it to be more reflective of what I thought Jesus would want from his followers when I was asked to cover events like "family first" marches to protect "marriage sanctity" and the like. My goal for the paper was to show what Christ followers should be for rather than fueling the fire of what some people believed they should be against. I did my best to do it well.

After a few months, it started getting harder and harder to get my paychecks. Print is dying, and small print start-ups are dying fast. I wanted to hang in with the little ministry, but I also needed to be able to pay my bills. I didn't have health insurance. I didn't have much of a nest egg. I was making about $400 a week, so every dollar counted.

Finally, I asked the publisher to lay me off so that I could get unemployment. As long as I was employed by him, I wasn't eligible for help. He did so, under duress, and I sat in my bed, weeping, while filling out the unemployment application. When I finished, I hit up Craigslist, where I applied for the job at Lowe's that introduced me to content strategy as a discipline and the money, security, health insurance, and other perks of working for a major corporation.

Had it not been for that desperation, I would not ever have applied for the job at Lowe's. I needed my little Christian newspaper gig to crash and burn to force me to make a move into something better.

When I was in college, I fully intended to become an academic. I thought I'd get my MFA in creative writing and move on to a Ph.D. program in literature. My plan was to get a full time job teaching literature and creative writing at a good university.

When I finished my master's degree, I started applying for Ph.D. programs. The rejection letters rolled in. I was horrified...I'd never experienced academic rejection before. My grades were top-notch. I wrote amazing application letters. My standardized test scores were in the 99th percentile. I was a perfect candidate for these programs, and I was heartbroken not to be admitted into one. I applied several times over the course of several years, and never got even a waitlist.

I went to visit a former professor from Carolina to find out if he had any insight into why I couldn't get into a program. He looked over my application materials, and he told me that I should have been a competitive candidate, but that everyone applying was a competitive candidate. There are hundreds of applications each year for a handful of spots, and it was the luck of the draw as much as anything. His words gave me some comfort, since I'd been looking for some glaring thing I'd done wrong. I was relieved that it wasn't my fault, but disappointed that the career I'd envisioned for myself appeared to be out of reach.

I have a few friends who did get into Ph.D. programs, and while I have envied them for years, I see now that I wouldn't be happy doing what they're doing. One of my friends (not in the humanities) landed a full time job teaching, but the rest of them are piecing together livings doing temp work or adjunct teaching. I value security, and I've done a lot of time putting together several part-time jobs to make ends meet. I hate that life, and I'm glad it's over.

I saw this article in the Atlantic yesterday about the dismal state of academia today, and I read through the comments of people who have spent a lot of time getting a degree that is not likely to pay off...not even in terms of life-satisfaction, and certainly not financially. That could have been me. If like had gone my way, it would have been me.

I never, ever in a million years would have chosen to go corporate, but I'm happier than I could possibly have been in the career I chose. These mistakes and accidents bumped me into a beautiful life, and I'm so, so grateful.

A day after writing this post, a colleague who works in academia posted this link about the plight of a woman who spent her entire career as an adjunct instructor. It's a sad story.
Labels: academia blessings I'm not a Republican Jesus teaching writing

A review of reading Little House on the Prairie with my daughters: Yikes.